This is what Classic Car ownership is all about!

Having begun over 20 years ago with a small selection of Bentleys displayed outside the hall, this year's event featured the Hall's biggest collection of vehicles to date, with over 400 cars featured on the lawns outside the hall and a further 610 cars making up the 36 car club stands around the arena, all bathed in glorious sunshine and accompanied by fine food and music. Classic car ownership at its best!!.

The diversity and quality of Historic vehicles on display was amazing.

Many of the cars on the main lawn were individually selected for the ‘Tollemache 110’ display and many took part in the ‘driveway’ runs along the main drive leading up to the house, each owner providing a brief verbal history before accelerating away.

Although some cars were highly polished, super valeted and perfect, there was an element of the ordinary everyday classic included in the Concours display as well as on the surrounding fields.

Of course it is not just about Historic vehicles.

The B17 Locomotive Steam Trust displayed a 5 inch guage model of the LNER Class B17 6-6-0 Express Passenger Locomotive which was operational from early 1929 on express services in East Anglia.

No 2847 was actually named ‘Helmingham Hall’ and served between 1935 + 1960, being broken up in early 1960, with only the two name plates now remaining, one displayed at the show and one kept at the Coventry transport museum

The Trust is currently building a new Class B17 Locomotive and with chassis now complete, it is expected to grace the rails in 2021.

36 car clubs organised individual displays. A number celebrated anniversaries - 60th anniversary of the Austin-Morris Mini, the Triumph Herald, the Jaguar MK2, the BMC ‘Farina’ range of cars and the Daimler Dart SP250, all of which were well represented.

With the high end classic car market softening and the price drops on some expensive metal being startlingly severe, there are some compelling opportunities around for lower priced everyday classics and cars ‘on the cusp’ of becoming classics.

Auction houses and dealers are being overly optimistic about reserves and prices and many top priced cars are failing to sell. Hence many are beginning to trade in the everyday classics and the time is now ripe to consider buying before the prices increase.

The Tourette Supreme, finished in Gold Leaf colours (but perhaps not quite as racey as a Lotus Elan Sprint!), was among many microcars present.

The Tourette was made by the Carr Brothers (later Progress Supreme Co Ltd) of Purley, London between 1956 and 1958.

It has a three-wheeled, rounded body that was available either in alloy on an ash frame, or in fibreglass. The car is powered by a two-stroke 97 cc Villiers engine driving through a four-speed gearbox with optional Dynastart reverse. Top speed was claimed to be 55 mph (probably quite frightening!!). The single rear wheel is mounted in a pivotal fork. Front-wheel movement was controlled by hydraulically damped spring units. Final drive was by chain. A single bench seat provided accommodation for two adults and a child with some luggage space behind the seat. 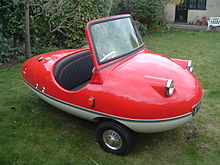 The show is not just for Historic or Classic vehicles. Many future classics, such as this Morgan 3 wheeler, modern Ford and Boss Mustangs formed part of the displays.

Whilst, for instance, Eightees and Ninetees Ferraris values have been a casualty of the teetering global economy with an average fall of between 10% and 12%, many future classics are holding their prices and in some cases increasing in value above their original new purchase price.

Take for instance both the modern Ford Mustang and all its high performance derevitives, and the Morgan 3 wheeler and Plus 4 which both command prices the same or higher than their retail price.

The Volkswagen Samba was the most luxurious version of the T1. Volkswagen started producing Sambas in 1951.

In the USA Volkswagen vans were informally classified according to the number of windows they had. This particular bus has 21 windows (which commenced from the 1964 model year) including eight panoramic windows in the roof (the earlier 23 window version had additional curved windows in the rear corners). To distinguish it from the normal Volkswagen van the name Samba was coined.

Instead of a sliding door at the side the Samba had two pivot doors. It also has a sliding fabric roof. At that time Volkswagen advertised with the idea of using the Samba to make tourist trips through the Alps.

Sambas were painted standard in two colours. Usually, the upper part was colored white. The two colored sections were separated by a decorative strip. Further the bus has a so-called “hat”: at the front of the van the roof was just a little longer than the car itself to block the sun for the driver.

This bus was converted into a Campervan at some stage in its life but the conversion does not detract from the value or appearance.

The name ‘Tollemarche 110’ for the main front of house display links Helmingham and the Tollemache family who moved in some years after the Hall was completed in 1510.

The gardens today have been extensively re-designed by the current Lady Tollemache to create something that was close to the kind of garden the family might have had in Tudor times.

What a fantastic backdrop to a Classic Car show.

This model also features a fabric roof, foldable to the rear of the vehicle, like that of a Citroen 2CV — rather than the later roof design, which only folds half way back along the roof. The Nuova 500 is one of three models featuring ‘suicide doors’.

Not long ago people would have laughed at the idea of getting good prices for classic everyday cars like the Austin/Morris 1100, Triumph Herald and Hillman Imp, and all their model derivitives.

With the Sixties beginning to swing again, as seen  by the level of interest in both ’60s cars and fashion at this year’s Goodwood Revival meeting, this is really the time to consider buying the likes of the Ford Anglia 105E, Austin A40, Austin 1100/1300 and, (dare I say it), the Austin Allegro, before the trend catches on and prices rise to ‘silly money’.

So now is the time to think again about turning your non-interest earning savings into classic metal and enjoy the experience of Classic Car ownership.